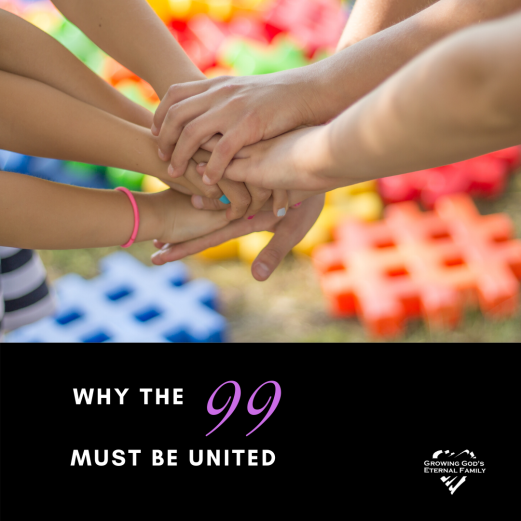 This blog post is a sequel to our most recent blog post on the stupidity of jealousy in the church. If you haven’t read it yet, you should check it out.

I will like to build on that blog post and encourage us as a body and as a family.

Paul said many of us who were chosen were not exactly one of the best people in the world. Many of us were the outcast, the rejected, the overlooked, the unqualified, the foolish. But God intentionally chose that and those who were not wise to confound the wise. He chose the weak to shame the strong (1 Corinthians 1:26-31).

You are blessed and specifically chosen.

Being a member of the 99 means that you are not alone.

“My prayer is not for them (the apostles) alone. I pray also for those who will believe in me through their message, that all of them may be one, Father, just as you are in me and I am in you. May they also be in us so that the world may believe that you have sent me. I have given them the glory that you gave me, that they may be one as we are one—  I in them and you in me—so that they may be brought to complete unity. Then the world will know that you sent me and have loved them even as you have loved me.”

Jesus prayed for the believers to be ONE just as Jesus and the Father are ONE. Our unity and love for one another legitimize our witness. When the 99 sticks together, work together, loves one another and do all things in unity, it will grow stronger and function optimally.

The story of the tower of Babel is a great story of unity though it was of ill-intent and God had to cause a division because he knew the power of unity. God himself is three persons in one. Unity!

“Now the whole earth spoke one language and used the same words (vocabulary). 2 And as people journeyed eastward, they found a plain in the land of Shinar, and they settled there. “Come, let us make bricks and fire them thoroughly [in a kiln, to harden and strengthen them].” So they used brick for stone [as building material], and they used tar (bitumen, asphalt) for mortar. 4 They said, “Come, let us build a city for ourselves, and a tower whose top will reach into the heavens, and let us make a [famous] name for ourselves, so that we will not be scattered [into separate groups] and be dispersed over the surface of the entire earth [as the Lord instructed].” 5 Now the Lord came down to see the city and the tower which the sons of men had built. 6 And the Lord said, “Behold, they are one [unified] people, and they all have the same language. This is only the beginning of what they will do [in rebellion against Me], and now no evil thing they imagine they can do will be impossible for them. 7 Come, let Us (Father, Son, Holy Spirit) go down and there confuse and mix up their language so that they will not understand one another’s speech.” 8 So the Lord scattered them abroad from there over the surface of the entire earth, and they stopped building the city.”

UNITY is a very powerful force. As the saying goes, “Together we stand, divided we fall.” In this story, the intent of the people was ill and brought no glory to God. However, God himself acknowledged that because of their unity, thinking and actually planning to build a tower that would reach into heaven was only the beginning of what they will do if they remained united.

Now, imagine if this same unity could foster evil, how much more would it foster good and strengthen the body of Christ?

The body of Christ (the 99) needs to be strong and unified not only for herself but because of those that are still lost in the world (the 1). We can preach and share the gospel more when we support, encourage and pray for one another. We can be better ambassadors and minister of reconciliation when we love one another as Christ has commanded us. It is by our love for one another, that the world will know that we are Jesus’s disciples and his witnesses.

We really need to understand that we are ONE body, ONE Church, and ONE Family.

No matter where you are in the world.

But I am afraid the church is yet to fully understand that.

Everybody is just trying to do their own thing. Be their own Christian. Different doctrines, beliefs, and denominations. Comparison of church buildings and ministries and it’s sickening.

We are supposed to be one body with different parts but we act and speak like multiple bodies.

We’ve gotta stop crumbling from within. We must be united.

When one falls, we must lend helping hands not mocking lips.

When one succeeds, we must rejoice and celebrate together not harbor jealousy or hatred.

May we love unconditionally, without judgment and condemnation.

May we support and encourage one another joyfully.

And may we persist in prayers for one another fervently.

As Jesus prayed, may God foster love and unity in the body of Christ and help us to be one. Amen.

You are Eternally Loved.

Esther Ademiju is founder and teacher of Growing God's Eternal Family. She is a growing student of the Bible under the teachings of the Holy Spirit and yearns to share what she learns with simplicity yet undiluted to all people. “God’s love is dynamic in dealing and one of the ways it can be shown through us to one another is by sharing, teaching & preaching His Word & Truth.” View all posts by Esther Ademiju