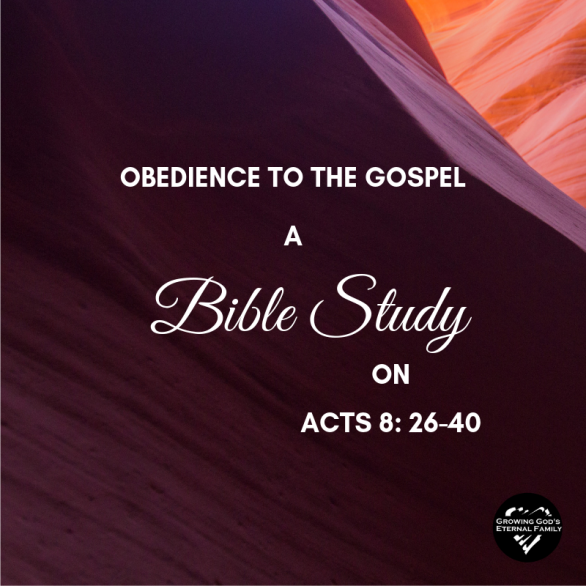 I suppose by now if you are a regular on this blog you know how much I love Bible study. There’s just so much to learn. So, roll with me as the Holy Spirit takes us on a ride through Acts 8: 26 – 40.

Before we dive into this particular chapter & story, I am moved to give you a quick backstory on who Philip is. It will help you to appreciate this story more.
So the Philip in this chapter is not Philip the apostle. He is one of the seven that were chosen in chapter 6 including Stephen to serve tables and serve the people so the apostle could be more devoted to praying and preaching the gospel. These men were filled with the Holy Spirit (Acts 6:5) so they were also qualified to preach the gospel but they didn’t complain and waited on tables obediently. Then in rest of chapter 6-7, we see how God mightily used Stephen and he was eventually stoned to death. But he death was very instrumental in propelling the gospel to other nations. In chapter 8, which is the chapter we are doing a study on, the whole church scattered because of persecution and then we see Philip, who went to Samaria and continued to share the gospel there.
This fulfilled Jesus words in Acts 1:8, “Rather, you will receive power when the Holy Spirit has come upon you, and you will be my witnesses in Jerusalem, in all Judea and Samaria, and to the end of the earth.”
All the apostle were sharing the gospel in Jerusalem, but with Stephen’s death and increased persecution, the gospel went to Samaria through Philip and it’s about to go to the ends of the earth starting with Africa through this Ethiopian man we are about to look at whom Philip shared the gospel with.
___________________________________________________________________
Now let’s start this study on Acts 8:26-40
26 An angel of the Lord spoke to Philip: “Get up and go south to the road that goes down from Jerusalem to Gaza.” (This is the desert road.) 27 So he got up and went. There was an Ethiopian man, a eunuch and high official of Candace, queen of the Ethiopians, who was in charge of her entire treasury. He had come to worship in Jerusalem 28 and was sitting in his chariot on his way home, reading the prophet Isaiah aloud.
So Philip was sent to a particular man, an Ethiopian official who was traveling back to his country. God will often lay a particular person on our hearts to share the gospel with them. He could also send you to a particular group, population, city, town or country and of course the world.

And when God sends, we must get up and go, no matter where. Philip was sent to get up and go to the desert road. This is a very unlikely place to be sent.

I probably would have said something like “Hold up God, what or who could possibly be in a desert? Why send me to such a place?”

But Philip didn’t ask any question. He just got up and went.  This is worth imitating.

29 The Spirit told Philip, “Go and join that chariot.”

When we faithfully obey the first instruction, the Holy Spirit will give the next one. All Philip had at first was, “Get up and go south…” When he obeyed that first instruction, another one was given for him to go join the chariot ahead.

However, we often want the whole instruction before we move. We must live by faith and allow God to lead us.

30 When Philip ran up to it, he heard him reading the prophet Isaiah, and said, “Do you understand what you’re reading?”

This Ethiopian man had an obvious yearn and desire for God. He came all the way to Jerusalem to worship and going back home to his country he was reading a chapter in the book of Isaiah (53:7). Though he doesn’t fully understand it, he still continued to read and seek God in his word. He wanted God and he did find God.

So God sent Philip to help this man find him just in time before he left Jerusalem and returns to his country. Though this man was coming from Jerusalem where the Apostles were actively and currently preaching and spreading the gospel, he somehow didn’t hear or what? Nevertheless, the grace of God will choose you, pursue you, find you and save you. As was the case of this Ethiopian man.

31 “How can I,” he said, “unless someone guides me?” So he invited Philip to come up and sit with him.

In fact, you are called to be a guide.

But we also need a higher guide.

Philip who became a guide to this Ethiopian man had the Holy Spirit as his own guide.

We can’t lead others to Jesus if we ourselves are far from him.

The Ethiopian man wanted to find and know God so much, so he willingly invited Philip into his carriage. A man who wants to know God must humble himself. Likewise, one who desires to learn must see the importance of being taught. We must be humble and teachable if we desire to grow in our knowledge of God.

In verse 27, we were told about this man’s great qualifications and credentials.

“He is a eunuch and high official of Candance, queen of the Ethiopians, who was in charge of her entire treasury.”

He is an obviously well trusted and influential man. He is a man of high caliber who is influential enough to ride in a chariot. He has every reason to be prideful and had pride dwelt in his heart, he wouldn’t invite Philip to sit with him in his chariot.

But he humbled himself. To know God, you gotta be humble.

And our God is also a gentleman and doesn’t force his way into someone’s heart or life. We must invite him in.

This man had the option to shun Philip (A carrier of God’s presence) or invite him into his space.

But, Glory to God, he invited him to sit with him so he could know more about God.

32 Now the Scripture passage he was reading was this:

He was led like a sheep to the slaughter,
and as a lamb is silent before its shearer,
so he does not open his mouth.
33 In his humiliation justice was denied him.
Who will describe his generation?
For his life is taken from the earth.

34 The eunuch said to Philip, “I ask you, who is the prophet saying this about—himself or someone else?” 35 Philip proceeded to tell him the good news about Jesus, beginning with that Scripture.

That scripture is from Isaiah 53:7 and he was talking about Jesus. Philip listened and answered. He listened and began from where the man was. He didn’t shun the man’s questions neither did he lose sight of why he was sent there.

He was sent obviously to share the gospel with this man, to tell him about Jesus which he did but he began by answering the man’s question. He began from that scripture and worked his way to the good news about Jesus.

A good friend recently told me, “You need to be deliberate about your conversations with people. Taking them from what they want to hear to what the gospel is about.”

I really held on to that instruction because often I either get distracted by what a person is saying and asking and I never get to the good news/gospel part or I shun what they are saying and try to stuff the gospel down their throat which often gets them defensive and they spit it right back out.

So, begin from where they are and be sure you get to the good news.

36 As they were traveling down the road, they came to some water. The eunuch said, “Look, there’s water. What would keep me from being baptized?” 37 Philip said, “If you believe with all your heart, you may.” The eunuch answered, “I believe that Jesus Christ is the Son of God. 38 So he ordered the chariot to stop, and both Philip and the eunuch went down into the water, and he baptized him.39 When they came up out of the water, the Spirit of the Lord carried Philip away, and the eunuch did not see him any longer but went on his way rejoicing.

The Ethiopian official asked if there’s anything that would prevent him from being baptized right now after hearing the good news. And the only qualification one needs to be baptized is to believe with all his heart.

For if you tell others with your own mouth that Jesus Christ is your Lord and believe in your own heart that God has raised him from the dead, you will be saved. For it is by believing in his heart that a man becomes right with God; and with his mouth he tells others of his faith, confirming his salvation.

So indeed there was nothing holding this man back from being baptized. So Philip baptized him and the spirit of the Lord took Philip away but the eunuch went on his way rejoicing.

The Gospel gives JOY to its recipients. Joy unspeakable. It’s called good news for a reason.

The man could be rejoicing because he found life or/and because he gets to take this good news and message of life to his countrymen.

The Ethiopian man might have been influential being a eunuch, treasurer and super close to the queen of Ethiopia. But he didn’t have joy, peace, and life until he met Jesus on that trip through Philip. He didn’t leave Jerusalem the same. That trip changed his life and that of men he took the gospel to. Through one man the gospel came to Ethiopia and Philip’s obedience was instrumental in that.

All our accomplishments and status in the world are vain without Jesus in our lives.

40 Philip appeared in Azotus, and he was traveling and preaching the gospel in all the towns until he came to Caesarea.

So we see again that Philip continued to obey the command to be Jesus witness to all and went about preaching the gospel.

When it comes to obeying God, it’s all about putting one foot in front of the other in faith. He will lead as you obey. God doesn’t just speak to be heard, but to be obeyed.

My greatest revelation through the book of Acts so far as I read to chapter 8 is that God didn’t just leave the gospel in our hands and stayed in heaven. Rather the Holy Spirit was and is still actively taking the gospel by himself to where and whom he desires through us.

He just needs us to be willing and obedient vessels.

Vessels that will go when sent.

Vessels that will open up their mouth and bear witness to what they have seen and heard.

Vessels that will guide others as he guides us.

You are Eternally Loved.

Esther Ademiju is founder and teacher of Growing God's Eternal Family. She is a growing student of the Bible under the teachings of the Holy Spirit and yearns to share what she learns with simplicity yet undiluted to all people. “God’s love is dynamic in dealing and one of the ways it can be shown through us to one another is by sharing, teaching & preaching His Word & Truth.” View all posts by Esther Ademiju